For information on COVID-19 in South Africa, please visit the Official Government COVID-19 website at www.sacoronavirus.co.za 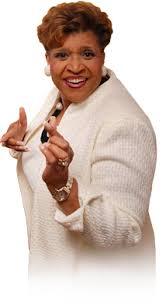 Russell-McCloud is a “visual speaking experience.” With more than 20 years on the lecture circuit, she is categorized as being one of the nation’s best. Her speaking style is engaging, highly substantive, well-researched, pertinent to her audiences, and entertaining, whether for the public or private sector. She is distinguished and distinct. Her style is classified as "big, broad and animated", which leaves her audiences anxious for more.

With each presentation she demonstrates, yet again, that she is a master at her craft as she artfully seeks to master the spoken word. In sum, this is a “speaker’s speaker” who specializes ascertaining the organization’s culture, interests and challenges The client, in turn, receives the value-add of the experience and exposure to this qualitatively measurable speaker who is, in a word, unforgettable.

Each year she speaks to more than 100,000 people in private and public organizations, in the United States and internationally. She encourages her listeners to surmount every obstacle that stands between them and... the possible. Her client list includes, but is not limited to, AARP, National Association of Women’s Business Owners; AT&T, Women’s Food Service Forum, eWomen’s Network, Wal-Mart/Sam’s Club, General Motors, American Honda, Cox Enterprises, McDonald’s, Northrop Grumman, General Electric, McGraw Hill Publishing, Memorial Sloan Kettering Cancer Center, Xerox, Procter & Gamble, and The United States Postal Service. Each company has benefited from having Russell-McCloud share her informed, inspirational wisdom and wit.

As a member of the Council on Legal Education Opportunity (CLEO), she studied at Harvard University, Cambridge, MA. She earned her Juris Doctorate degree at Howard University, School of Law, Washington, DC. Prior to embarking upon her speaking career, Russell-McCloud was an attorney with the Federal Communications Commission, Chief, Complaints Branch, Broadcast Bureau, Washington, DC for ten years. Then she decided to follow her true passion which was to be a business entrepreneur and global professional orator. Born in Indianapolis, IN, and graduating from Kentucky State University she knew that her true career connection was to prepare meaningful presentations for diverse audiences, and to meet them at their point of need.

She has received many honors, including being presented more than 300 keys to American cities. She has served as the 11th National President of The Links, Inc., and the National Parliamentarian to the Alpha Kappa Alpha Sorority, Inc. She has been named as one of the top five business motivators in the country by Black Enterprise Magazine; identified as one of the top 10 speakers in America, “Success Runs in Our Race”; featured in ESSENCE Magazine, and in EBONY magazine as one of the most influential people in the United States, and featured as the cover story of SPEAKER magazine, National Speaker’s Association 2007 July/August.

A resident of Atlanta, Georgia, Russell-McCloud is married to Bishop E. Earl McCloud, Jr., the 127th elected and consecrated Bishop of the African Methodist Episcopal Church.